The Making of the Award-Winning Short Film With Aaron Sims

Director Aaron Sims explores the power of storytelling in Unreal Engine 5 and invites participants to discover his UE5 workflow and process behind the making of the award-winning short film, THE EYE: CALANTHEK. Encompassing the full spectrum of UE filmmaking, this Gnomon Workshop title covers everything from story development within Unreal to character and world-building, mocap and animation in sequencer, editing, and beyond.

Aaron takes an up-close look at Lumen to illustrate the process of lighting interiors, and exteriors, along with his best practices for lighting the characters themselves. Previsualization (previs) in-engine is a real game-changer because assets bring the story to life and illuminate creative opportunities. Once the stage is set and the story is refined, editing then brings the film together using all the latest UE5 real-time production techniques. 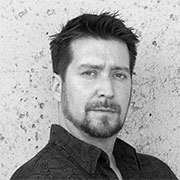 Aaron Sims, the mind behind some of this generation’s most unforgettable cinema creatures, began his career over three decades ago as a special effects artist working alongside industry icons Rick Baker and Stan Winston (Evil Dead, Gremlins 2, How the Grinch Stole Christmas, Men In Black). His pioneering techniques in the world of visual effects influenced the face of character and creature design in Film, Television, Games, Previs, and VFX early on in their application (A.I., Constantine, War of the Worlds, Big Fish). In 2005, Aaron Sims Creative was formed in order to bring together a wide range of the world’s most talented concept and visual effects artists and create memorable characters, creatures, VFX, costumes, and key scenes (I am Legend, The Incredible Hulk, The Amazing Spiderman, Clash of the Titans, The Conjuring, Stranger Things). Aaron's unparalleled skill and dedication to consistently creating stunning content for all platforms of visual entertainment has led ASC to become the premiere boutique studio for creature and franchise design & development.