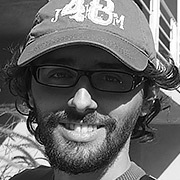 Francesco Corvino is an Architect and Concept Artist who has worked extensively with architectural firms and for the film industry. His love for architecture, movies and storytelling is the main force behind his visionary style. After having earned his Master's Degree in Architecture in Italy, Francesco moved to Los Angeles to specialize in Visual Effects and Concept Design. Shortly after, he received an opportunity to work with Hollywood veteran Aaron Sims on some of the biggest blockbusters in the industry. His career subsequently took off, first bringing him up north to work on Game of Thrones in Montreal and ultimately landing in London as an Art Director for Framestore, an award-winning VFX company. Today Francesco enjoys working in house but keeps also busy as a remote freelance artist for clients located all around the world. Some of the films Francesco has worked on include: Thor Ragnarok, Fantastic Beasts, The Martian, Game of Thrones, Birdman, Teenage Mutant Ninja Turtles, Edge of Tomorrow, Maleficent, Spiderman 2, 300 Rise of an Empire, Sin City: A dame to kill for, World War Z.