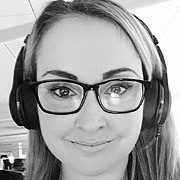 Elaina Scott studied Character Animation at California Institute of the Arts and graduated with a bachelor's degree in Character Animation.  While she was still in school, she got her first job in the animation industry working on The South Park Movie: Bigger, Longer and Uncut.  She also worked on The Simpsons and Star Wars Galaxies, a massively multiplayer game released in the year 2000.  Since graduating in 2002, she’s worked in the video game industry, feature animation, and the Visual Effects industry, on such titles as Iron Man 3, Avengers 2, The Hunger Games, Fast Five, Insurgent, Transformers 4, TMNT, and The Fantastic Four. She is currently the Animation Supervisor for Supergirl on the CW, as well as doing animaiton for The Flash and Legends of Tomorrow.